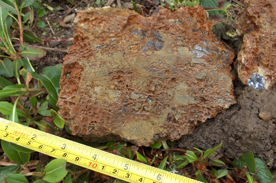 There was a wild colonial boy, Jack Duggan was his name

He was born and raised in Ireland, in a place called Castlemaine

He was his father’s only son, his mother’s pride and joy,

And dearly did his parents love, the wild colonial boy.

Lead and silver were first discovered near Castlemaine, County Kerry in 1789. Castlemaine takes its name from a castle that once stood on a bridge over the River Maine. Until the seventeenth century the river was the boundary between Norman and Gaelic lands. It was a divide between the stronghold of the Fitzgeralds and the land of the Gaelic clans. The Slieve Mish mountains are ramparts to the north and Ireland’s highest mountain Carrauntohill (1,038 metres) rises to the south in the Reeks of the Magillicuddy. It is a wild, beautiful and rugged place.

The old mine is in the townland of Annagh about one kilometer north of Castlemaine. A company started by the landlord Sir John Godfrey was the first to mine here. Over the first three years scratchings produced s few hundred tons of silver rich lead. The workings went down to a depth of 72 feet. It remained a small enterprise and even by 1824, according to geologist Thomas Weaver, there was just a small pit. The dimensions of the pit were 50 feet deep and on surface 50 by 60 yards. Weaver considered the mine worth reopening and negotiated a lease for his employers. The new Hibernian Mining Company negotiated a lease with the landowners Lord Headley and Sir John Godfrey in September 1824.

The pit became too deep for safety so they sunk shafts to get to the deeper ore. Over the next five years the miners extracted 800 tons of silver-rich lead ore. Then the timbers in the shaft collapsed. We think there is more ore to find. We see the old Annagh Mine as an eruption of possibility and a clue to something big and deeper still in the greater area. Penarroya in the 1960’s were also attracted to this neglected outpost. They drilled many holes that were too shallow to test the target horizon at the base of the reef.

In 1824 it was a time of speculative mania to invest in Irish mines. Hibernian was one of four companies set up to get leases over prospective ground. By December 1828 the workings had cost £6,227 and there is no record of any returns. The Annagh lead mine was abandoned until a new mining boom exploded in the 1850’s. At that time there was a surge in the price of copper and lead. Some of this investment in exploration came from sympathy in the time of the Great Hunger. It was not a famine because ships with grain sailed from Ireland while many starved. Some entrepreneurial philanthropists thought that new mines might provide employment for a starving people.

Group Eleven Mining and Exploration plans to explore around the old Annagh silver-lead mine. It has taken us six months of trawling through archives to settle on this cluster of claims. It has taken two more months to process the application for this ground. The exploration area lies along a regional dolomite alteration front called the Rathdowney Trend. This trend is a prospective corridor for zinc and lead linking to the Galmoy and Lisheen mines. The key is to find what localises deposits like Lisheen along Main Street. Group Eleven also plans to explore its ground around the old Gortdrum copper-silver mine. Gortdrum is only a few kilometres from Glencore’s Pallasgreen zinc-lead project. Pallasgreen is Glencore’s best greenfield zinc-lead project in the world. Gortdrum and Pallasgreen lie along another intersecting lineament which bears northeast and is called the Limerick Trend. Exploration geologists love trends. It helps make sense of the chaos.

BRG (http://brg.ie/) took a mineralised grab sample in 2009 near Castlemaine. It assayed 51% zinc – see Blog picture. We believe that it is not a meteorite. It is too light and has the wrong composition. We think it is also a clue to what lies beneath. There is glacial overburden near surface as a relic of the last ice age so we have to be careful and trace ancient vectors but we suspect not very far. We need to be “cliste”. Cliste is an Irish word. The target horizon at the base of the reef remains largely untested by drilling. It is a compelling and neglected prospect and the last stop along “Main Street”. The last real prospect before it heads out into Dingle Bay and the Atlantic Ocean beyond. It runs between the big beard of the Dingle Peninsula to the North and the glorious Ring of Kerry to the south.

We will go about our exploration without fuss and with the support of those not afraid to risk for reward. Why? Because now. Because we see a train crash coming in zinc supply. But mostly because we love the treasure hunt of exploration. To find new rich mineral deposits. It was we were trained to do many years ago and then of course there is the passion. We churn new ideas around what controls the location of these zinc deposits. There is recent airborne geophysics survey available for the area to trace help us where prospective structures ghost on surface. These are mineralizing conduits which plumb deep to feed new ore bodies.

So what about zinc? Why should it interest you? If you follow this blog you will know my views. I admit that the bus is overdue.

Nyrstar is the world’s largest zinc producer. It announced this week that it is to exit mining and stick to refining. It is taking away 100,000 tonnes of zinc concentrate by the suspension of Myra Falls in Canada and Campo Morado in Mexico – see my Blog A Tale of Two Metal Deposits and a Volcano, October 9th, 2014. Nyrstar says that if current low zinc prices persist that actions will be considered to suspend a further 400,000 tonnes of zinc concentrate production. It is only four years since Nyrstar bought Breakwater’s zinc mines for US$619 million. This was a risk mitigation strategy to target over half of its zinc con feed from its own mines. At the time Chinese smelters had what seemed like an insatiable appetite for zinc. Nyrstar worried about its dependence on the supply of zinc from other miners.

Mining at MMG’s Century mine in Australia ceased in August while Vedanta’s Lisheen mine in Ireland is now history. Total loss of capacity from the two mines will be a significant 675,000 tonnes of zinc per year. These two mine closures combined with the recent. Glencore’s recent cut of 500,000 tonnes will take about 8.5 per cent of world zinc mine supply off the table. ILZSG forecasts an increase in global demand for zinc of 3.3% in 2016 that is a lot of zinc for China to find in its mines.

Slowing growth in China spooked the markets over the last few months. China consumes almost 50 percent of metals mined globally. It needs metals to build its cities, infrastructure and to manufacture consumer electronics and white-goods. But we only need demand in China to remain the same to see a shortage of zinc and that will not happen. Maybe it is not slowing growth in China which is the problem but greedy over supply of metals from mines. Annual mine production rose year on year from 2000 to 2011. Mining capital expenditure rose from $30 billion to $160 billion. By 2014 a cumulative $1 trillion had flowed into the mining sector and over supply followed. So now investment is falling and production taken off line.

Over reaction and over correction with cuts to zinc production from healthy mines as major mines close anyway because of resource depletion. The roller coaster of longer amplitude capital cycles trying to synchronise with the high frequency cycles in consumer demand and fibrillations of the speculator. We know all about capital cycles and over correction in Ireland. During the Celtic Tiger 25 per cent of our GDP was based on the construction sector. A decade ago we had too many homes built. After the collapse developers were stranded. Unfinished homes were abandoned in ghost housing estates in the countryside. Now we have a housing crisis.

When you close mines and axe jobs it takes more than a switch to reopen mines, it needs rewiring. That is why 2016 will be an interesting year for zinc.

We all know the story of the little boy who called wolf, but the point is that the wolf came in the end. The artery flowing with new zinc projects needs a stent. If important mines keep closing without new discoveries then it is not hard to predict what will happen.

LME warehouse zinc stocks are just below 600,000 tonnes. When you add other zinc stockpiles in SHFE and bonded warehouses there is just 800,000 tonnes. That is about 20 calendar days of annual consumption.

When the zinc price surges again some hibernating zinc projects will come out for the spring. Some are long in the tooth and maybe anaemic and with special needs. You should ask why these zinc projects will populate the landscape, it may be just the absence of younger virile males – see my blog Cliffs and Fault Lines, August 27th, 2015. What we need now is exploration and discovery of quality zinc resources. We needed this to happen ten years ago because to allow for the many failures and development of the best. What is a quality zinc resource? It is one which has the grade to make good even during the majority of the time when the zinc price is in the doldrums. To my mind a quality zinc mine should produce metal in the lowest quartile of the cost production curve. Its viability should not depend on driving unrealistic economies of scale.

Group Eleven Mining and Exploration is an incubation minnow with ambitious plans. It is a new private Irish zinc company (http://www.groupelevenresources.com/) which is very interested in advanced zinc projects at this time. It is an opportunity for our investors while many are losing their nerve and blaming it on China and the end of the world.

Group Eleven is also focused on exploration in a world class zinc district. Exploration is the only way to find new quality zinc projects like Lisheen.

So what would Lisheen be worth now? What is the reward?

Let’s try and keep it simple. The first shipment of zinc concentrate from the Lisheen Mine was in December 1999. It is closing now after almost 15 years of production. It produced about 4.5 million tonnes of zinc concentrate averaging 53.6% Zn. I will ignore the lead for simplicity as it only adds 10% to revenue. That translates to about 2.4 million tonnes of zinc or 5 3 billion lbs of zinc over the life of the mine. Assuming a long term average price of $1 per lb for zinc gives us a gross metal value of $5.3 billion just for the zinc. A gross margin of over $2 billion. If you don’t look you will not find. The Old Annagh Mine seems like is a good place to start.