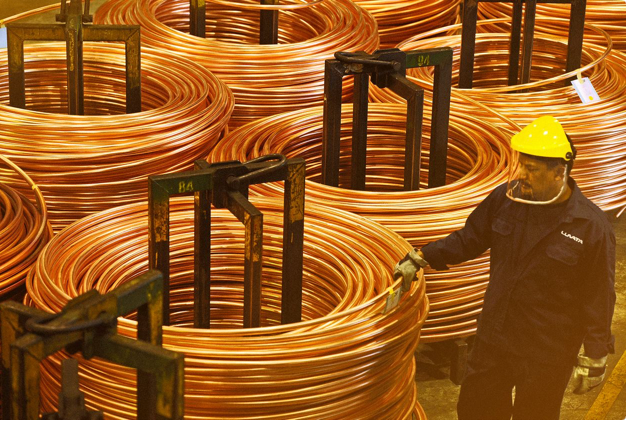 I was a little baffled by the shenanigans last week over the copper price.  Maybe it is something to do with some solar impetus related to the summer solstice. The price of the red metal might seem a trivial concern if it was not so critical, more than ever, to our global economy and civilisation.  The price of copper is the “bellwether” of global economic activity because of its plethora of end uses.  But in our journey of accelerating technological innovation and renewable energy transformation the red metal is becoming even more vital and intrinsic to our daily lives.

Smelting of copper ores, mostly malachite, began around 5,000 BC as it was used and for weapons, tools and jewellery.  Later it was discovered that the red metal  could be greatly strengthened and honed to a fine cutting edge by adding one part tin to two parts copper to produce the alloy called bronze.  I visited the great medieval copper mine at Falun in Sweden around 2008 where mining dates back to the 1200’s.  Falun was a source of great wealth and was in part responsible for the emergence of Sweden as a great European power.  At its peak in the 1700’s Falun accounted for some 70% of the western world’s copper.  Many of the world’s greatest buildings were roofed with Falun copper including the Palais at Versailles.  You can read about the demise of Fat Mats on this link https://visitworldheritage.com/en/eu/mining-area-of-the-great-copper-mountain-in-falun-sweden/db00563f-a09c-4b11-8b47-3cff918dd96a

For the geologists among you I should say that Falun is in the famous Bergslagen Mining District of Sweden.

In 1860 the Welsh town of Swansea smelted 90 percent of the world’s copper from ores obtained from Cornwall and Anglesey.

The economies, which can afford it, are committed to chucking vast piles of money at the transition to renewable energy.  This transition and electrification has a voracious appetite for metals.  Copper is ideal for electrical wiring because it is easily worked and can be drawn into a fine wire and it has high electrical and heat conductivity.  Copper is the second best conductor behind silver but 100 times cheaper.  The red metal is 60 percent better conductor than aluminium.  An EV requires roughly three times as much copper as the conventional ICE most of us still drive. Your “Cloud” is made of copper not vapour.  Power grids to energise our increasingly technological worlds feed data-centres will require small planets of copper.  It will remain the most intensely used metal in renewable energy technologies – see graphic below. Copper supply and price is too critical and strategic to our modern global economy to be left to tactics driven by the moody whims of speculators and the cunning greed of traders.

Last week the Chinese made an announcement to bleed some red-metal from its strategic reserves (SRB) and the FOMC in the USA signalled higher interest rates anticipated at the shorter end of the medium-term.  It was enough of a spook from China and a hawkish tone form the United States to put speculators on the run.  The red-message was intended to spook speculators in the red metal.   More a threat of a short burst that the capacity for a siege. It succeeded.  But see it as a headless sprint in a carefully measured marathon.

This reminds me of the wise words of Benjamin Graham:  “thus the investor who permits himself to be stampeded or unduly worried by unjustified market declines in his holdings is perversely transforming his basic advantage into a basic disadvantage.”

This world is emerging from the pandemic. Annual global-warming-stripes since 1850 have now moved dramatically into the glowing red end of the spectrum.  This needs a coordinated global response.  Copper is central to the march of renewable energy technology.  This malleable red metal is critical for extending and intensifying the electrification of the world.  So fortunate that it exists and that it accumulates in the earth’s crust in mineable concentrations.

China takes half of all copper and most other base metals mined globally every year.  The red republic needs to avoid runaway metal prices for political as well as economic reasons.  There is little that can be done to dampen demand so why not tinker with supply?  China’s SRB announced last week that it would release stock from its copper reserves to dampen down prices.   Not surprisingly it is hard to know how much metal the Chinese have stockpiled.  Citi Bank estimates it is about two million tonnes of copper.  This is about 8 or 9  percent or a little over a  month of global, annual mine-production at around 23 million tonnes.   A month only if we were to assume China would recklessly empty its reserves. It is not for nothing that it is called a planned economy. The latest news is that China will release about 20,000 tonnes of copper next month.  Just a dribble from a very finite strategic reserve.

End user’s secure supply in the vast core of the market, metal traders like Glencore occupy the outer mantle and make money whether the price is up or down but the speculator dabbles in the crust.  The gambler fumbles in a greasy till crucially driving the headline price at the edges of the market. The speculators swallowed the message hook line and sinker and so the copper price somewhat submerged a tad last week.  This softening in the metal price in turn creates a buying opportunity, a window which opens again fleetingly for a huge strategic consumer in the east to once again accumulate.

You can submerge a cork in water but the fundamentals of physics and density mean that the cork will bob back to the surface again once you remove the downward pressure. Right now the Chinese are trying to suppress the copper price.  They have to bluff and strategically leverage their limited stockpile of the red metal in a furious false charge and hope the speculators back off and think it is for real.  But it is too little and the sprint is too short and unsustainable (oh that terrible buzz-word again) and the marathon goes on.

Some 40 percent of global copper mine production comes largely from Andean porphyry deposits in Chile and Peru.  Some of these mines are thirsty where there is very little water.  Water in Chile is a critically dwindling resource.  The government of Chile has already threatened to close Escondida, the largest copper mine in the world.   BHP owns 57.5% of Escondida.  There are some mine-supply beacons. Important copper development projects such as Peru’s Quellaveco, majority-owned by Anglo American, and Ivanhoe’s Kamoa-Kakula in the Democratic Republic of the Congo (DRC).

We talk about sustainable mining.  But mining is not sustainable in the time-frame of human existence because the ore runs out. Even with the copper price recently reaching an all-time high it is questionable whether there is enough incentive in the price right now to build some greenfield and some brownfield projects critical to future mine supply bot to mention high-risk exploration to discover the next generation of ore deposits.  Sustainable mining is a delusion.  We have to hope that extraordinary mine finders like J. David Lowell emerge to find deeper deposits at higher grades.

Even with the copper price recently reaching an all-time high it is questionable in the next few years whether there is enough incentive in the price right now to build some greenfield and even some brownfield projects critical to future mine supply.  Further out there is likely not enough in the copper price to fund high-risk exploration to discover the next generation of big ore deposits. Copper grades, for what is now considered economic, are on a a slide.

In late May analysts at CIBC announced that they adjusted their end-of-year copper price forecast to $5.25 a pound. These estimates are now 22% and 32% above 2021 and 2022 consensus estimates.  Metal prices like all commodity prices can remain out of kilter for a long time.  It will be a bumpy ride but hold on.  Our critical needs are not changing.  The transformation to renewable energy is not for turning.  You can thwart some supply and some demand for some of the time but you can’t thwart all supply and all demand for all of the time.

I will leave you with a question for next time. Which mining company has the largest copper reserves and for me at least has the best value unrecognised value?