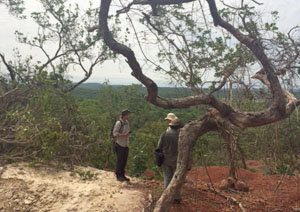 I will be away for the next couple of weeks in Andalucía.  I hope to wind my way up from the coast and get up to the pueblo blanco of Ronda again and to stroll in the shadow of Hemingway but this time not in the early afternoon heat when all sensible people are enjoying a siesta.  Ronda is the origin of bullfighting when a man first dismounted from his sweating steed to confront the bull on foot. To command the heights and see across the expanse of cultivated plains and heat haze to the mountains and beyond those hills to the Iberian Pyrite Belt and arguably one of the largest natural concentrations of metal on the planet.  It is hard to get away from thinking of geology and ore deposits even on a family holiday in Spain but I can assure you that this will be no busman’s holiday. I hope that when the summer is over that we will all emerge again emboldened to take on more risk.  As without financiers regaining their courage to back intrepid geologists with vision then we will not find the higher quality ore deposits which can bear the heavy operating costs with which it seems our industry is irreversibly saddled.

At the Mines and Money conference in London at the end of last year Robert Friedland, in waxing lyrical about the discovery of Kipushi, said emphatically that such exploration success was not an overnight success and that it took 19 years to find three world-class deposits.  He surrounds himself with top class people and then provides the funding so they can explore unshackled.  There is here the virtue of patience in a world addicted to quick gains and exits.

I paraphrase Maureen Gaffney in her book Flourishing where she puts it aptly that in this world (explorers and mine builders) have to be optimists and the world belongs to the optimist not because they are always right but because they are positive and even when they are wrong they are still positive and that is the way to fail and correct and change course and improve and finally succeed.  Educated, passionate, “eyes-open” optimism pays over time; pessimism can only offer the empty consolation of being right.

So I just have some parting thoughts on risk for now.  When I was in West Africa recently the perceived threat of Ebola virus was at the fore-frontal-lobe of traveller’s concerns. In reality the chances of being killed on the road are probably orders of magnitude greater.  Occam’s razor is the rule of logic that says that a simpler explanation should be preferred over a more complex explanation and here there is a very simple explanation.  Our perception of the threat or risk of contracting Ebola virus is blown completely out of proportion and apparently we can attribute that to the Stone Age wiring of our brains.

When something big and vivid and dramatic happens, we expect more of the same, but when such an event hasn’t happened in ages, or never has, we expect it won’t.  The risk of earthquakes is like that.  There is a big event and everybody expects another soon after and people go out and buy insurance.  But the chances of another big earthquake are lower closer to the event but will increase as time goes on as stresses continue to build.  However as time goes on the worry of another event recedes and precaution and insurance drops away.  I do not know what other quakes are ahead of us but it might be wise to spread your exposure to lots of things, and so you might have the bases covered you might allocate some modest investment in an array of companies which explore, develop and mine precious and base metals.

Have a great summer