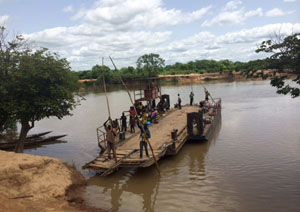 We land with Air France in Bamako, the capital of Mali on the Niger River.  Bamako means “crocodile river” in Bambara.  The French under general Gallieni built a railroad at the end of the 19th century all the way from Dakar on the Atlantic to reach the Niger at Bamako.  This was an extraordinary engineering accomplishment and a major change of direction in the plan behind the construction of a Trans-Sahara railway direct from the Mediterranean to the Niger.  It was to create a vast colonial empire for the French to rival India for the British in wealth and prosperity.  Access to the western Sudan and vast regions watered by great rivers with very fertile floodplains inhabited by 200 million people.  The original Trans Sahara scheme was abandoned after only two years because the survey team led by Colonel Flatters was massacred by some nomadic Tuaregs.  And so it was less heroic but more sensible to advance on the Niger by chemin de fer from the Atlantic.

Next morning we strike out heading southwest to the Guinean border at Kourémalé on a good national road.  Some fifty kilometres west of Bamako we encounter the Manding Mountains with bluffs of Proterozoic red sandstone rocks chiseled by the winds and dissected by affluents of the Niger River.  Sometimes towering fingers of sandstone jut skyward to form extraordinary shapes.  The border crossing takes only 30 minutes compared with the three hours of paperwork we will have to deal with  on the return to Mali a few days later.  The road takes us on into Guinea and through the Birimian rocks of the fabled Bure goldfields heading for Siguiri and passing through Doko and its extensive sprawl of shanti huts and striking blue tarpaulins which marks what must be one of the biggest colluvial gold mining camps in West Africa.  There are motorbikes, many motorbikes.  When Yury worked in this region in the 1990’s as part of a Soviet Geological Mapping Expedition there were few bridges over the big north-flowing tributaries of the Niger and it was a rare site to see a bicycle not to mention a motorbike.  A sign of new-found wealth after the discovery of gold which now has a much higher price.  There is no talk here of squeezed margins and high operating costs absorbing the stratospheric gold price.  No excuses given here just back breaking work as the opportunity-cost is close to zero for these miners.

It strikes me that these people get almost nothing from the Government to support subsistence, health and education and in return no taxes are paid.  It is survival and every man only depends on himself although the pecking order in every artisanal camp is highly organized and woe betide any miner who perverts the system as he is cast out forever.  The global financial crisis and the chilling shiver of a possible return of the Cold War has no relevance here.

We cross the Milo River on a ferry of sorts powered by tall slender sinewy men with barge poles. The Milo is a tributary of the Niger and the Milo valley was once described as the African garden of Eden.  We can only continue to cross the Milo using this ferry in the next couple of weeks and drive over the black cotton soil on the eastern bank of the river and on to the more solid laterite roads beyond before the rains come strong and more regular at the end of June.

We hear that there is an outbreak of ebola at Kouroussa just 150 kilometres away but we should be alright as we head further east toward a remote frontier.

It is my first time to visit the southern gold concession and the newly mapped workings are extensive and show clear continuity over several kilometres of strike from where we have drilled and delineated a handsome gold resource.  Some are using high-spec metal detectors which can cost over $10,000 to scan the red earth and find nuggets in the top fifty centimetres of laterite soils.  There is a Presidential decree from the capital that men must stop mining during the rainy season and return to the fields to sow crops such as maize and cassava.  We come across only young women and girls with small babies washing ore at the surface as the men stay discretely below ground scraping away in the catacombs of gold.

We meet the village elders and Imam from the local village.  They are glad to see us again.  A freak storm on Monday twisted its way along a narrow corridor has cut a swath of destruction uprooting some trees and ripping the roof of the local school.  Yury has never seen anything like this in his whole time in Guinea.  The rounded design of the traditional conical thatched Guinea-huts does not expose a surface for the rasping winds to bite and grip: only the buildings with designs from the outside world are damaged.  I am presented with a small bag of Kola nuts.  These nuts are often used ceremonially, presented to chiefs or presented to guests of honour.  It is in these lands that the Kola trade flourished from the middle ages providing its own bonanza.  It was grown in clearings in the forest, traded at markets in the valley and then carried laboriously to the mud villages and cities of the “Western Sudan” and beyond.  We introduce our important guests to these proud local Malinki people.  It is about respect and transparency and trust this so called community relations business – no need for expensive consultants if you keep it simple.  The Imam prays for our success and the elders join in the incantation.  We have to make a big mine here near the frontier with Mali.

My most abiding memory is driving back through the falling darkness of night to Bamako and coming across a convoy of carts pulled by little donkeys piled high with dead-wood gathered in the local forests.  It seems like the whole family is walking ahead and behind and flanking the laden carts.  They walk at night because it is cool for themselves and the animals.  They will walk maybe forty kilometres to the markets on the outskirts of Bamako.  So poor and so dangerous without any lights on these fast roads.  It is such an unequal world.