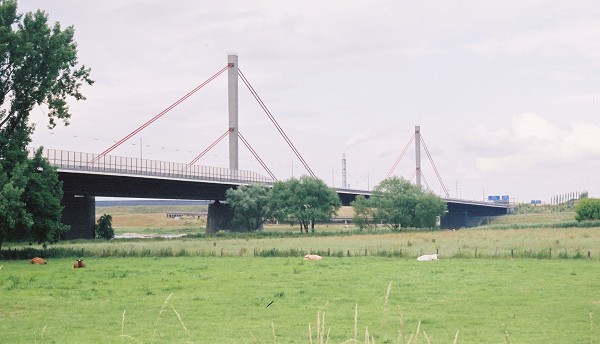 Came in the evening, cold and gray,

To a chasm vast, both deep and wide.

The old man crossed in the twilight dim;

The swollen stream was as naught to him;

But he stopped when safe on the farther side

And built a bridge to span the tide.

“You are wasting your strength in labor here;

Your journey will end with the closing day,

You never again will pass this way.

Why build you this bridge at eventide?”

“Good friend, in the path I have come,” he

said, “There followeth after me today

A youth whose feet must pass this way.

This chasm which has been naught to me

To that young man may a pitfall be.

He, too, must cross in the twilight dim.

Good friend, I am building this bridge for him.”

We build bridges to connect and to transport goods that we trade and move people to work and play.  As the poem above suggests we build these bridges for future generations as well as our own. I read in an article several weeks ago in the Irish Times  by Derek Scally in Berlin that engineers have detected serious rips in the steel structure of the Leverkusen Bridge. Traffic was reduced from six lanes to three lanes and trucks weighing over three-and-a-half tonnes were banned from crossing.

The Leverkusen Bridge is a vital artery across Germany but also a key segment of a transnational transportation corridor across Europe. Closure now forces trucks to take a 30 kilometre detour across other ageing bridges across the Rhine. A study estimated that closing of the Leverkusen Bridge would cost €108 million per quarter in additional fuel and time. The Bridge at Leverkusen hopefully is a bridge too far for the slumbering bureaucrats in Germany and the EU, if it is not already the canary in a coal mine.

We can discuss metal commodity prices and macroeconomic factors affecting supply and demand but we live in this physical world of wrought steel across an endless flow. Is this Bridge an early warning sign that it is too late to arrest the accelerating decline in Germany’s basic structural foundation which is the skeleton which holds its economy erect?

The Leverkusen Bridge  crosses the Rhine within the Rhine-Ruhr industrial heartland and within one of the most elite industrialised and powerful economies in the world. Infrastructure is like a pot-hole and if you do not repair in time. With neglect a road will deteriorate relatively quickly and the surface will eventually erode to vestigial causeways of tarmac linking clusters of pot holes – something I have experienced on long pelvis-wrenching journeys in Tanzania in the 1990’s between Dodoma and Mwanza on Lake Victoria. I would prefer to drive on a well-maintained dirt road in Western Australia any day than to bump and jar along the remnants of a neglected pock marked donor-road in sub-Saharan Africa.

When the Berlin Wall fell states and cities in West Germany had to dig deep and cut budgets to assist its cousins in the east to bring their infrastructure up to standard. It is predicted that a quarter of bridges owned by the Federation will reach the end of their life within the next decade. Germany’s finance minister Wolfgang Schäuble has promised an extra €10 billion for infrastructure. The International Monetary Fund called on the German government to boost spending on infrastructure by 0.5 per cent of gross domestic product which translates to €14 billion over the next four years. The IMF also sees the infrastructure investment with its multiplier effect as a very effective way to stimulate growth in a stagnant economy.

Is there a solution to the crumbling infrastructure problem throughout the European Union? We should have little confidence that the “Juncker” investment plan for Europe, as we know sinking in a quicksand of austerity, will be able to effectively leverage €21 billion from existing EU and European Investment Bank funds into €315 billion in project funding. It looks to me like the plan is built on the miracle of the loaves and the fishes.

The problem is not just confined to Europe. The US needs to invest $3.6 trillion to return its infrastructure to a state of good repair by 2020 according to estimates by the American Society of Civil Engineers. Failure to invest will squander the long sustained competitive advantage the US gained in the 1950s and 1960s. As Russia lurches from crisis to crisis Putin’s ambitious infrastructure investment plan to replace decayed Soviet-era roads, airports, railroads and power generating capacity to become the fifth largest economy in the world by 2020 is in tatters .

So something has got to give and that something will require the West to beg, steal or borrow or most likely “print” to invest in the future before it is too late for its crumbling infrastructure. China is a driver for metal demand as it creates a new city or suburb the size of Philadelphia every month but the west is delusional if it thinks it does not have to maintain what it has built as the cost in the long run will be far, far greater. I am contemplating about the amount of zinc that will be needed to galvanise all that steel and that is why I invested in a modicum of zinc ETFs at Christmas for the future.