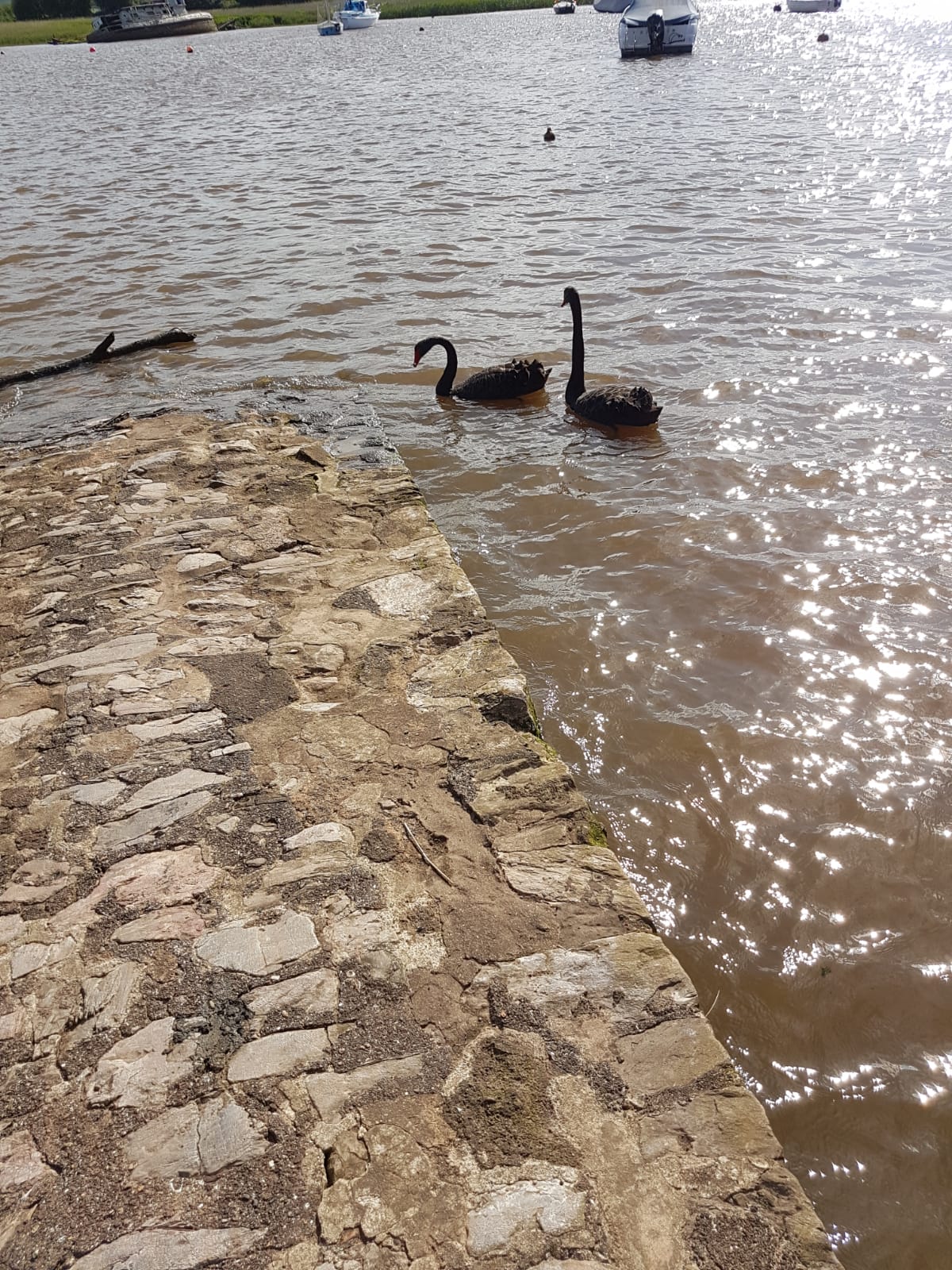 I vividly remember that lavish but gaudy five-star hotel at mid-day under the high African sun on the banks of a glittering Niger River. It was built with -dollars from  Libya. I was sitting at a big round table which was shrouded in white linen.  It was mid-day and I was dining with an influential man from Tombouctou. He said he had met Gaddafi once in He had learned from him about the power of reciprocity. His father had 45 children by a cluster of wives. And by such a paternal progeny had he been blessed with this blood-network of siblings throughout West Africa.

Across the room, in a corner, I noticed a table of seven younger but not young Chinese. Smiles of confidence and determination and occasional smug laughs.  The next generation of colonial masters but not by force but by debt and reciprocity.  These masters of the universe were smoking ridiculously long slender cigarettes. I wondered what they were up to. I was in Bamako, capital of Mali.

I guess it must have been 2007 or thereabouts. We were on our way to a gold exploration project in a remote part of western Guinea. The project-area was within a stone’s throw of the River in lands of the Malinki straddling the border with Mali. It was located in the legendary Buré Goldfields. Maybe you wondered where the word “guinea” came from for those classic horse races in England? It was easier to get at the property through Mali. We had flown from Paris to Bamako on Air France. Then a day’s drive south in rental 4×4’s and down through the cotton fields around Bougouni and then west toward, but not as far as Kankan in Guinea. The remote border crossing could keep you guessing for hours but the frustration was still well worth it in travel time. The other way from Conakry was an epic three-day journey across Guinea from end to end. In Sub Saharan you do not drive at night unless you feel very lucky.

So what were these young Chinese businessmen doing in Bamako? Most probably they were on a mission to buy Africa’s commodities.  Maybe trying to capture Africa’s metal endowment. Metals are critical and strategic to their technological future. Critical means you need it, strategic means you do not have it. The European Union has a list of critical metals but that is about all it has done so far –  make lists.

The US has trading clout and rattles the sabre. Yes, China needs to know that trade is not a road with four lanes going one way with one lane going the other. Can we blame China? The trade imbalance is mostly down to the Chinese working harder and saving much, much more. There could not be a greater contrast between Trumpian walls and Xi’s belt n road bridges.  All empires whether they are military or economic degenerate near the end of the natural cycle.  It is the inevitable and natural law of entropy.  Hunger subsides and energy dissipates and a new energized contender emerges. But it is the vision that fails first.

China has been moving into Africa for some time. The aim is to secure tomorrow’s supply of critical and strategic metals. They offer in exchange debt financing for vital infrastructure. African mines are the collateral. China also scrambles for metals needed for cell-phones, electric vehicles (EVs) and utility-scale power storage. Even the Cloud is made of copper.

But let’s look at a metal that is a key component in EVs and all kinds of electronic batteries. gives stability and high-energy-density to batteries. This provides longer life and safer operation. You can magnetize Cobalt like iron, although it has only two thirds the magnetic strength of iron. Cobalt keeps its magnetism to much higher temperatures than iron. Iron loses its magnetism at 770°C but for cobalt, the temperature is 1,130°C.

The word Cobalt comes from the German word for goblin. In the 1500’s silver miners in Saxony got a surprise when trying to smelt what they believed was ore. They encountered toxic fumes of arsenic off but no silver. This was not surprising because they were dealing with an ore now known as smaltite[1].

Cobalt contributes up to 60% to the value of lithium-ion batteries. The use of these batteries in electric vehicles (“EV”) is the key driver of cobalt demand. Bloomberg forecasts 35% of vehicles sold by 2040 will be electric, currently, only 1% of global sales are EV. EV sales have recently been rising high. Bloomberg’s predictions now look conservative.

In the last six Tesla has reduced the average amount of cobalt used in its vehicles by 60 percent. This means a drop from 11 kilograms to 4.5 kilograms per car.[2]

of cobalt mined in the Democratic Republic of Congo. The mines are in the Katanga Province in the south of the country near Zambia. Chinese companies control eight out of the 14 largest cobalt mines in the DRC[3]. What is of concern if you are not Chinese is the processing supply chain. The chain that turns raw or minimally-processed cobalt into battery-grade materials. It is almost all located in China.

The DRC never had a peaceful transition of power. It is a country with an area of France, Spain, Germany, Sweden and the UK combined.  The DRC faces the mos daunting infrastructure challenge on the African continent. Vast geography, erupting and persistent conflict and disease, low population density, great rivers. It is easier and much quicker to take to the air though way beyond the means of the maddening crowd. To fly over vast tracts of tropical rainforest than to attempt any excursion on soupy laterite roads where they exist. It is impossible for a broke, bungling but most of all corrupt regime to rule such a shredding jungle. Governance, business, and commerce are cancerous with corruption. The precious islands of cobalt and a relative sea of copper come from the mineral-rich province of Katanga. Where and when in Africa has a mineral-rich province wanted to secede from its stodgy motherland? Look no further than mineral-rich Biafra and a war of session with the rest of Nigeria in 1967.

What do we need now to change cobalt from a niche into an even more strategic metal? The West to be in a trade war with a superpower that controls the cobalt ? Trump has delivered

Last February the price of cobalt fell 40 percent from a previous mid-November peak. In response production of cobalt surged in the Congo by 44% this year. World annual production had now reached a lofty 106,000 tonnes. At half this annual mine supply to account for other vital uses for  you are left with  53 million kilograms. This mine-production could cover 10 million EV batteries assuming 5 kilograms per EV. Last year Japan produced 8.36 million passenger cars. Replacement of just Japan’s 2018 annual production of passenger cars with EV’s would consume nearly all that cobalt. There is an ethical question about the mining of a significant amount of Congo-cobalt. The other simple question is whether current cobalt production levels are sustainable without major new discoveries.

We finish on the geology as there is another twist. Cobalt is mined for the most part as a by-product of nickel and copper. For this reason, it is hard to stimulate investment in cobalt exploration outside the DRC. Mine economics hinge on the prices of the main-product metals in the orebody cobalt. If the nickel and copper price sinks then cobalt mine supply is in the balance. It is a bit like lead production regardless of its metal price in some silver mines. There are of course some rare exceptions:  cobalt is the main metal in Bou Azzer district in Morocco.

There are four distinct deposit types for cobalt:

What way will the future demand for cobalt go? What disruption in the precarious cobalt geopolitics and corrosion of the supply chain? Hard to predict based on current information? Is it a low-predictability but high-consequence situation? Nassim Nicholas Taleb’s definition of a Black Swan.  A cobalt-blue swan? As Taleb cautions: the fact that you have never seen one does not mean it does not exist. The brace of black swans in the blog-photo above is of a romantic pair seen in Topsham, Devon during the early summer by my good friend Gerry Lawlor.  Brexit is also a Black Swan.

Do your own careful due diligence; it is not only technical. Down by the river, there are cesspools of corruption and human exploitation. A goblin is a small, grotesque, mischievous and sometimes outright malicious creature.  It is also greedy, especially for gold and jewelry. Beware of goblins staking ground in the long-beam shadow of the head-frame.  We aspire to protect the environment and tackle global warming and the proliferation of plastic.  Clean energy technology needs critical metals.  These metals can not be synthesized but can only be mined.  We must somehow forge the murky river to get to the clean technology and energy on the other side.  Yes, we have to save our planet but we must also avoid returning to the cave.

[1]Smaltite is a cobalt arsenide.

[3]Needless to say Glencore is also involved in cobalt mining in cobalt-enriched Katanga and those that are interested can read about the Kamoto Project.

10 thoughts on “A Cobalt-Blue Swan”