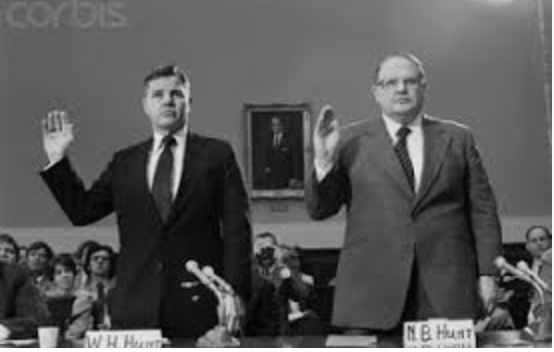 Silver Thursday and the Hunt Brothers come to mind given the sudden spurt in the silver price. Over the last couple of weeks the metal has been playing catch up with its richer gilded cousin. Is the silver market still small enough for a rich megalomaniac to manipulate?

It is forty years ago since Silver Thursday on the 27th March, 1980 when a buccaneering attempt to corner the silver market bankrupted Bunker Hunt. History is far more compelling than the most effervescent conjecture.

In the round the total value of silver above ground at today’ s silver price is somewhere around US$61 billion. That amount is equal to the net worth of Sergey Brin co-founder of Google. It is not much larger than the market capitalization of Newmont Corporation. The world’s biggest gold mining company has a market capitalisation of US$55 billion. The silver market compared to gold market is very, very small. The silver market is still small enough for a Bill Gates, Mark Zuckerberg, Jeff Bezos or an Elon Musk to chew and spit out if the Feds were in a permissive or laissez faire mood.

The value of gold above ground and hoarded back underground in vaults is about 250 times more than silver.[1]. The silver price has a higher Beta than the gold price because the silver market is two orders of magnitude smaller than the gold market. The gold market is simply too big to manipulate despite the conspiracy theories.

The historic value of gold to silver can stay out of kilter for a long time and has been above 100:1 in recent times. When investor sentiment swings to silver then the price impact is much greater than for gold. An investor-sunlight through the eye of a silver sewing needle burns. The same light through a larger gilded aperture creates heat without the burn. The gold price is up 15% since mid-May but the silver price has risen quicker in recent weeks. It now takes an ounce of gold to buy 80 ounces of silver. The historic value ratio over the last 20 years is 60:1 and over the 20th century about 50:1.

Gold is having its day as a safe store of value. This is not surprising against a backdrop of negative real bond yields. The sudden and major expansion in money-supply debases currencies. The geopolitical sabre rattling has added spice to the recipe. Based on historic value ratios the silver price has still some catching up to do.

Back in the late 1970’s inflation was a major concern much as it is in today’s Covid times. During that decade inflation averaged 10 percent through a war in the Middle East and an Oil Embargo. Inflation peaked in 1980 at 13.5% in the aftermath of the Iranian Revolution. It was illegal to trade in gold in the early 1970’s. Nixon decoupled the dollar from a fixed gold conversion of $35 an ounce in 1971. Shut out of speculating in gold, the Hunt brothers turned to silver.

The Hunts joined with two Saudi sheikhs and bought huge quantities of silver futures. These futures would mature in September and December 1979 and early 1980. What was unusual was that they actually took delivery of the metal.

The Hunts throttled silver supply and so the price went up and up and up. The Hunts and allies stashed away 371 million ounces of silver bullion, at that time worth $16.4 billion. That was at least 75 percent of the visible world supply. From August 1979 to January 21st 1980 the silver price rose from $9 to $51 dollars per ounce.

The Federal Reserve had to step in for the same reason it will step in if the Bitcoin market becomes a threat. The Fed compelled banks to stop making loans for speculative activity. It became clear that the Fed was after the Hunts’ scalps. Their credit evaporated. There were concerns that the Hunts might not be able to meet margins with new loans and would go under. The price of silver began to slide.

The Government considered a bailout to prevent systemic chaos. In the end there was no bailout. The government didn’t want anyone to think it was underwriting dangerous financial speculation. A private consortium of banks and companies bailed out the Hunts. Congress scolded Hunts and charged them with market manipulation. Fines followed fines and the Hunts went into bankruptcy. It took a decade for them to unwind all their silver holdings and make their pay back creditors. The final bill left them billions poorer but still wealthy by most standards.

Self-fulfilling prophecy is a staple of economics.  A recession can be caused by the expectation of a recession.  This is particularly relevant to a virus of fear driving global economic contraction. The self-defeating prophecy of economic forecasts and predictions is just as interesting.  There are so many predictions and cogent arguments out there now from more than the usual suspects that the price surge for gold and silver is just getting started.  Punters will buy now and sell later to defeat this prophecy.

Whatever way it goes this time it is different.  Punters can now speculate on gold.  History would never repeat itself surely?  But still on this Sweet Thursday we should remember Silver Thursday forty years ago.

f you enjoyed this article and aren’t already a subscriber, you can click here to sign up to my newsletter.